"Thankful" is Kelly Clarkson's debut studio album. The album was released on April 15, 2003 by RCA Records.

The album was originally supposed to be released in November of 2002, but due to Kelly's demanding schedule & the difficulty of finding suitable tracks for her taste & image, it was delayed several times.

By the time the album was released, it was over six months since her single "A Moment Like This" reached number one on the charts.

Two songs originally on the album "Trace of Gold" and "Today for Me" (written by Stephanie Saraco) were replaced just before the album release by "Anytime" and "A Moment Like This".

Early released versions of the CD still show the original tracks on players that read the data from the CD itself (such as Windows Media Player). The two songs have yet to be heard by the general public.

Copies of the album sold during its first year of release contained a computer program that could be loaded and used with the internet for artist updates and music videos. The program ceased to function when Kelly's official RCA website was launched.

The album included three cover tracks: "(You Make Me Feel Like) A Natural Woman" originally by Aretha Franklin, "Some Kind of Miracle" originally sung by Puff Johnson and "Just Missed the Train" by Danielle Brisebois.

The song "Just Missed the Train" was previously covered by Carly Smithson (then Carly Hennessy), who worked on much of her album with Danielle Brisebois.

On Metacritic (a website that compiles various reviews), the album received a score of 62, indicating generally favorable reviews.

Entertainment Weekly noted that "Clarkson glides through octaves with the masterful control of someone who's been doing this for decades."

They note that "[her] high notes are sweet and pillowy, her growl is bone-shaking and sexy, and her midrange is amazingly confident for a pop posy whose career is tied for eternity to the whims of her American Idol overlords."

On the other hand, Q gave the album a very negative review, stating that the album "has her trilling like Mariah Carey on fluffy R&B tunes."

The album sold over 1 million copies in six weeks. According to Nielsen SoundScan, it has sold 2,745,000 copies to date in the United States. 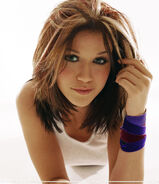 Add a photo to this gallery
Retrieved from "https://kellyclarkson.fandom.com/wiki/Thankful_(Album)?oldid=4677"
Community content is available under CC-BY-SA unless otherwise noted.